Stephen Wiltshire And His Autistic Art 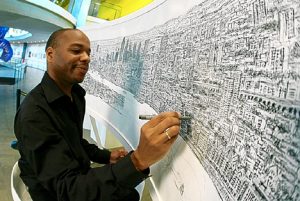 Stephen Wiltshire is one of the most extraordinary artists on the whole planet, and he has autism! His gift is beyond the human mind. He draws from his memory, and it would only require at least 10 minutes to look at a view. He memorizes every tiny detail and brings them to life in just a short period. He started to draw right before he was able to speak at the age of five. Stephen Wiltshire was diagnosed to have autism when he was only three.

Today, Stephen is an outstanding artist known all over the world. He is even called “The Human Camera.” He loves to draw cities, buildings, and landscapes, and he has made a drawing of New York City. It only took him a 45-minute-helicopter ride to have a look at the city and five days to complete his masterpiece. How can that be possible? Is it even possible to memorize every detail of an enormous place and keep it inside one’s head? Stephen’s drawings are so precise that they all have the right number of windows, doors, and pathways of every building! 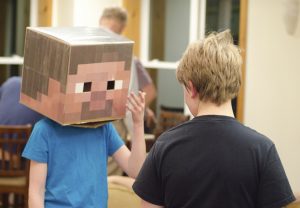 Does autism contribute to this exceptional gift? Yes, it does! Studies show that the brains of people with autism are created distinctively. The back part of their brain, which is responsible for visual information, is exceptionally developed and advanced compared to other parts of the brain. It explains why people with autism have difficulty with other skills like communication and decision making. They often struggle to express themselves through speaking and gestures but are ingeniously exceptional when it comes to art involving the memory.

“Many people with autism are visual thinkers,” shared Temple Grandin, Ph.D., a psychology assistant professor of Colorado State University. “All my thoughts are like videotapes running in my imagination.”

What Is Art To Stephen Wiltshire?

According to her sister, “Drawing for Stephen is like air and water for us. He cannot live without it.” It is his way of expressing himself and the overwhelming power of his brain. We may not be able to understand how everything he sees flashes back just exactly how he sees them, but Stephen has a way to show it, and it is indeed remarkable!

How Did Art Help Stephen Wiltshire?

Stephen was mute and was only able to speak when he was five. Art was his tool to express himself. “This was my form of language,” he said. It is his way to connect with the truth of ordinary people around him.

“Art expressions, particularly drawings, provide useful information on development in children, especially young clients who are 10 years or younger. For example, differences in artistic development can help us understand something about a child’s emotional experiences, cognition and sensory integration—but only up to a point, because most of what has been widely published has been derived from largely Western cultures,” reveals Cathy Malchiodi, PhD, LPCC, LPAT, ATR-BC, REAT, an art therapist, research psychologist, and author in the fields of art therapy and trauma-informed practice.

Why Is Art Important For People With Autism?

Art is essential for people with autism because it is their way of communication. They struggle with social skills such as interacting effectively with other people. They have a hard time understanding things that are common to us, and they have different ways of reacting to specific situations. Art helps in controlling their anxiety and other eccentric behaviors which can be some of the symptoms of autism.

Blythe A. Corbett, PhD, wrote, “Many people with ASD excel in art and use it as a way to express themselves and share their unique perspective on the world. Some propose that the arts have the potential to nurture talent, reduce stigma, and provide a platform for others to see the ‘ability in ‘disability.’” 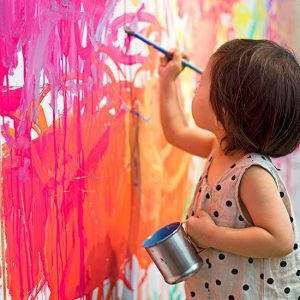 Why Is Autism Important To Art?

People with autism have unique brain functions compared to other people. They have a remarkable way of seeing the world beyond human comprehension. Their brains can perform tasks that are impossible for people without autism.

Stephen Wiltshire is indeed gifted – gifted with autism! And for this, he can let us have a glimpse of the incredible things that happen inside his mind through his extraordinary autistic art.